„Supported by a grant from Iceland, Liechtenstein, Norway“.    „Co- financed by the State Budget of the Slovak Republic“.

The objective of the project is to reconstruct the Water Mill in Dunajský Klátov, focusing primarily on the elimination of damages caused by the flood of June 2013 in order to improve the technical condition of the site as a cultural and historical monument and to create suitable conditions for study and to recognize the legacy of previous generations as our cultural heritage for the public.

The reconstruction resulted from the need to renovate the building and technical infrastructure in accordance with valid STNs and to acquire the museum premises with a higher standard of equipment. It is designed in accordance with the principles of designing museum facilities, exhibition facilities, and cultural monuments.

The aim of the investment is to create a comprehensive functional and architectural complex with the possibility of solving the segregated pedestrian zones with barrier-free entry, to support the development of new activities in the region and to create a cultural stall for the public. The possibility of providing education, information and cultural content will promote balanced regional development by enhancing the competitiveness of the region.

The basis of urban boundaries in the field is the existing access and service communication (access to agricultural machined areas), which intersects the water flow, centred on the water surface. This forms the basic skeleton of pedestrian paths that make the object and the river bank accessible, with the possibility of a visual entry of the mill from the opposite bank, which also includes the proposed wooden pier. From the urban point of view, a complete functional and architectural unit has been created with the possibility of solving the segregated pedestrian zones with respect to the barrier-free entrance. The limiting factor in the territory was its position, which according to § 15 and § 16 of the Act of the National Council of Slovakia No. 543/2002 on nature and landscape protection falls within the 4th and 5th degree of protection and protection of natural habitats.

Reconstruction of the actual object of the turbine, water wheel, transmission system and lower transmission

In the realization of the rehabilitation of the water mill were minimized the interventions in the original, undisturbed structures of the water mill and all the retained architectural elements and details, as well as the equipment and elements of the mechanical and technical equipment of the mills were preserved and protected from damage. No changes in its material and spatial composition have occurred with the reconstruction of the object.

A new NN cable connection has been implemented to provide internal and external illumination of the turbine and electric drive of the mill wheel when there is insufficient water level in the mill.

Reinforcement of the mill and the river bank before the veil

The water flow to the mill wheel is led by a mill drive with a claw from the Little Danube. The river bank was reinforced with a wooden wheel construction with access of visitors to the water surface according to the opinion of KPÚ Trnava and ŠOP Dunajská Streda.

Along the access road, new wooden fencing with different structure and density is realized depending on the need for visual contact with natural green, forest and water surfaces. In the beginning of the communication are created parking stands - static transport for visitors of the mill, as well as for tourists of Klátovský branch.

The landscaping is carried out according to the requirements of the Regional Monument Office in Trnava. A dendrological survey was carried out as a basis for a detailed solution of the field and landscape modification by prescribing the trimming of trees and the design of the new planting.

The reinforced quarry surfaces are minimized to the trench pavement and the irregular shaped areas under the wooden seating prior to entering the mill. At the water wheel are designed reinforced banks of the river with access to the water surface. On the opposite side of the water surface, a wooden walkway is dripped from the access road, drifting into a wooden pier over the water surface, which forms the artistic accent of the entire urban composition. The priority reason for solving the wooden walkway and the pier besides making the sightseeing of the surroundings and the mill more accessible from a far perspective is to create barrier-free entry for people with limited mobility and orientation. Accidence and the ground plan of the pier are based on negotiations and agreements at the KPU in Trnava. 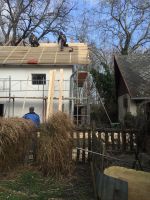 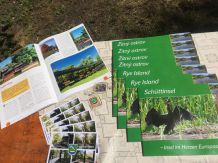