„Supported by a grant from Iceland, Liechtenstein, Norway“.    „Co- financed by the State Budget of the Slovak Republic“.

Technical monuments are of historical importance in the development of the productive forces and are among the basic determinants of the civilized development of society. Their primacy cannot replace any new buildings or constructions. In addition to documentary value, they also have aesthetic qualities that enhance the environment. Typical technical monuments of the Rye Island are mainly water mills that were in operation on the Great and Little Danube and on the Klátovský branch of the Little Danube.

According to historians, water mills on the territory of the island are known since the 12th century. In the second half of the 19th century there were still more than one hundred water mills in 21 localities -in some villages, there were more. For example, in Vojka nad Dunajom there were 15, in Bodík 14, in Šamorín 13 mills. Watermills were also located in such localities, which are now at a considerable distance from the river, for example Šamorín, Veľký Meder, Balon, Jurova, Malý Dvorníky, Vydrany and Lúč na Ostrove. From the very large number of mills in the Rye Island were kept very little. In the district of Dunajská Streda we have the following technical monuments: the water saw in Jahodná, the remains of a water mill with a pit in Jahodná and a water mill in Dunajský Klátov. In addition to these, the water mill in Tomášikov and the water mill in Jelka were preserved in the Rye Island (or on the little Danube).

The construction of the mills was adapted to the water flow: on the Danube and on the Little Danube they built the basement on the mountain and sub-mountain streams. The building with the mill could be in the water on pillars (so-called "wheeled"), on boats (so-called ships) or on the river bank. The ship mills in our region were known and used on the Danube (Gabčíkovo, Palkovičovo, Medveďov). The most widespread were the wheat mills, but none of them survived, only the remains of the pillars in Jahodna testify the former glory of these mills.

Underwater mills with a large paddle wheel and a marsh on the shore have been quite rare in our region, and yet one of them is managed to be saved in Dunajský Klatov. This precious technical monument was built at the end of the 19th century. It presents the state of milling production and technical thinking in the area of the Rye Island in the early 20th century. The significance of the monument increases with the almost completely preserved technical equipment with all the elements that probably come from the beginning of the 20th century. From the point of view of its occurrence, it belongs today to the little preserved monuments of its kind in the wider region. The last owner of the mill was Michal Cséfalvay, whose father bought the mill from the previous owner - the Dukasov family. At that time, the mill was made of wooden boards. Around 1922, the mill was rebuilt to the present form of a masonry mill that shows its current appearance. Unlike other water mills in the region, the mill is bricked, only the wheel and drive are placed in a wooden additional part. Thanks to this conversion, the mill was the only one in the whole district to be preserved as a technical facility.

The mill is a one-storey building built of burnt brick with a saddle roof built on the bank on the stone and partly on concrete foundations, without a cellar space. The ceilings between the floors are made of wooden beams with a wooden board. The windows are steel with a simple fixed glazing from the opening section; the doors are wooden boards with wrought steel hinges. The roof is covered with tiles. The roof structure is wooden, designed by the bearing construction system.

The technical equipment of the wheeled mill consists of a drive, gear and working system:

The base of the drive system is a large paddle water wheel for the lower drive, which is a combined metal-wood construction. The water to the mill wheel is driven by a mill drive with a bucket. The water wheel is double-skinned with two double metal crowns on the outer circumference, in which are planted 32 wooden blades. The metal wings of the wheel are connected by eight pairs of wooden prismatic rails (rays), starting from a massive horizontal wooden shaft, which are attached to the shaft by means of metal fastening straps. The large shaft of the large wheel in the horizontal position is made of oak wood, with machined steel pins embedded in wooden bearings at both ends. Castle carrying a horizontal shaft of the water wheel is fixed with stakes of acacia wood that are fastened in the bottom of the water course.

Through the transmission system, the rotational movement of the vertical water wheel with the horizontal shaft is transmitted to the rotary movement of the horizontal millstone, a tread rigidly mounted on a vertical iron spindle. The stone composition: some mill stones, along with a carved wood hopper that filled the grain into a grinding plant, and a cylindrical stool that later replaced the millstone, belong to the most valuable parts of the mill's inventory.

The mill was in operation until 1941, when the operation of all the smaller water mills in the region was stopped. In the second half of the 1980s, the mill was purchased by the state and was declared a protected national cultural and technical monument. Construction and technical reconstruction of the building was carried out. For the public, the mill was released on August 21, 1987 and is currently used as a museum exhibit. The mill is used for long-term exhibition purposes of the Rye Island Museum in Dunajská Streda, which presents its exceptional values, as well as the milling tradition of the region.

After the end of the operation, the water mill began to fall apart, mainly due to the position of the bridge in the 1950s, where the water was removed from the water wheel. Originally, Klatovský branch was covered by a wheel furnace that guided and accelerated the flow of water on the wheel. The malfunction of the water wheel did not allow the maintenance of technical equipment. Added to this were the consequences of high water conditions and floods, and the need to save the mill for the following generations was becoming more and more relevant. The village in 2014 under the program "Preservation and revitalization of cultural and natural heritage and promotion of diversity in culture and art within the framework of the European cultural heritage" submitted a project for the renovation and reconstruction of a water mill, and this was accepted in 2015.

As part of the implementation of the complex reconstruction of the mill in 2016, the reconstruction of the interior and the exterior including the new roof of the mill building took place. The milling wheel, its supporting part and the corresponding gear wheel were restored. There were also strengthened the shores, a new enclosure was built, a complex modification of the surrounding ground took place. On the opposite bank of the Klátovský branch opposite the mill, a pier - viewing platform was built. For the public, the mill was reopened on May 7, 2016.

The water mill is located in the outskirts of the village of Dunajský Klátov in the south-eastern part of the Huszamér site behind the former premises of the peasant cooperative on the plot no. 255/4, register no. 4 in the cadastral area of the municipality. The Water Mill is situated on the banks of the Klátovský Branch of the Little Danube, which is an important natural site, and has been declared a national nature reserve since 1993. The water mill itself is declared a national cultural and technical monument registered in the Central List of the Monument Fund in the State List of Immovable Cultural Monuments under the number Zs / 82/2301 / NH.

Visiting the water mill in Dunajský Klátov is a sightseeing experience not only for lovers of historical sites or technical monuments, but also for nature enthusiasts of Klátovský branch - a territory with many protected plants and animal species. 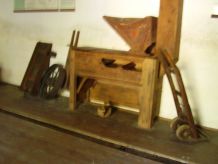